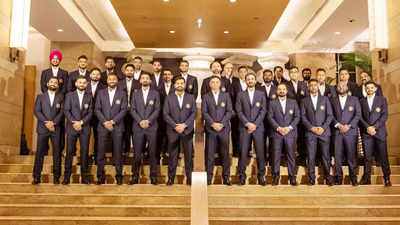 Just In: Men in Blue depart for Australia on Thursday Morning to participate in the upcoming ICC Men’s T20 World Cup. The event will kick start on October, 16, while Rohit-led India will play their opening match against Pakistan on October, 23rd.

Team India didn’t advance to the Semi-Finals in the previous competition in 2021; hence, the former champions would want to put on a substantially stronger showing this time to win the Champions Trophy and return home.

It is pertinent to mention that Men in Blue have won back-to-back Home-Series matches against Australia and South Africa, respectively, and are undoubtedly riding a high as they go for Australia.

The news of Team India departing from the Country is shared through the Social Media Account of the Board of Control for Cricket in India. The BCCI posted a picture of the entire Indian team departing for the T20 World.

The massive cricket tournament will get underway in Australia on October 16. The competing teams will play Warm-Up Matches before the commencement of the main rounds, while the event’s unqualified teams will compete in the Qualifying Rounds.

Rohit-led India will play their opening match against Pakistan on October, 23 in Melbourne. Notably, Pakistan not only soundly thrashed India in the 2022 Asia Cup but also eliminated them from the competition. India will therefore use this opportunity to atone for its loss.