Arsenal with annual revenue of €487.6 million is considered as the 6th highest earning club of this Europe and currently the 3rd most valuable club of England with net worth of $2.24 billion. Arsenal like other emerging contenders of Premier League split huge bid of money this season in order to sign new players and also improved their contracts with some of their football players as the wage bill of the The Gunners is expected to shy £180 million this year. Over the last few years the wage bill of Arsenal rose from £166 million to £180 million. 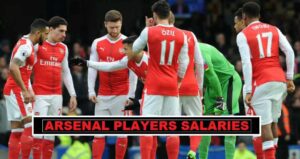 Arsenal with annual budget of £195 million is settled on the fifth place in the league but the spending of crazy money by this football club is not appreciated by its fans as they have been criticized for not signing quality players. Although Gunners pay big wages to their new signings of this summer as Alexandra Lacazette and Sead Kolasinac earns £100,000 per week whereas the Mesut Ozil also extend its contract for £350,000 a week.

Arsenal new signing for season 2018-19 includes the contract with Lucas Torreira the Uruguay midfielder for £25 million and also signed their new goal keeper Bernd Leno for around £25 million. The Gunners will also announced their new coach shortly before the end of their current season and Unai Emery will replace Arsene Wenger who finally resigned after spending 22 years with Arsenal.

The annual wage bill of Arsenal slightly increased over the last few seasons as back in 2014, Gunners spent around £166 million which increased to £180 million in 2015 and touches down £195 in last season and their wage bill for 2018 is expected to increase dramatically. The Arsenal wage bill becomes strong after they moved to Emirates from Highbury.

Arsenal have made some high profile signing for upcoming season 2018-19 as after making contract for 4 years Sead Kolasinac joined this team and worth £199,500 per week to them. Arsenal also singed Henrikh Mkhitaryan for £120,000 a week. Whereas Mesut Ozil and Hector Bellerin renewal their deals with Gunners for current season.