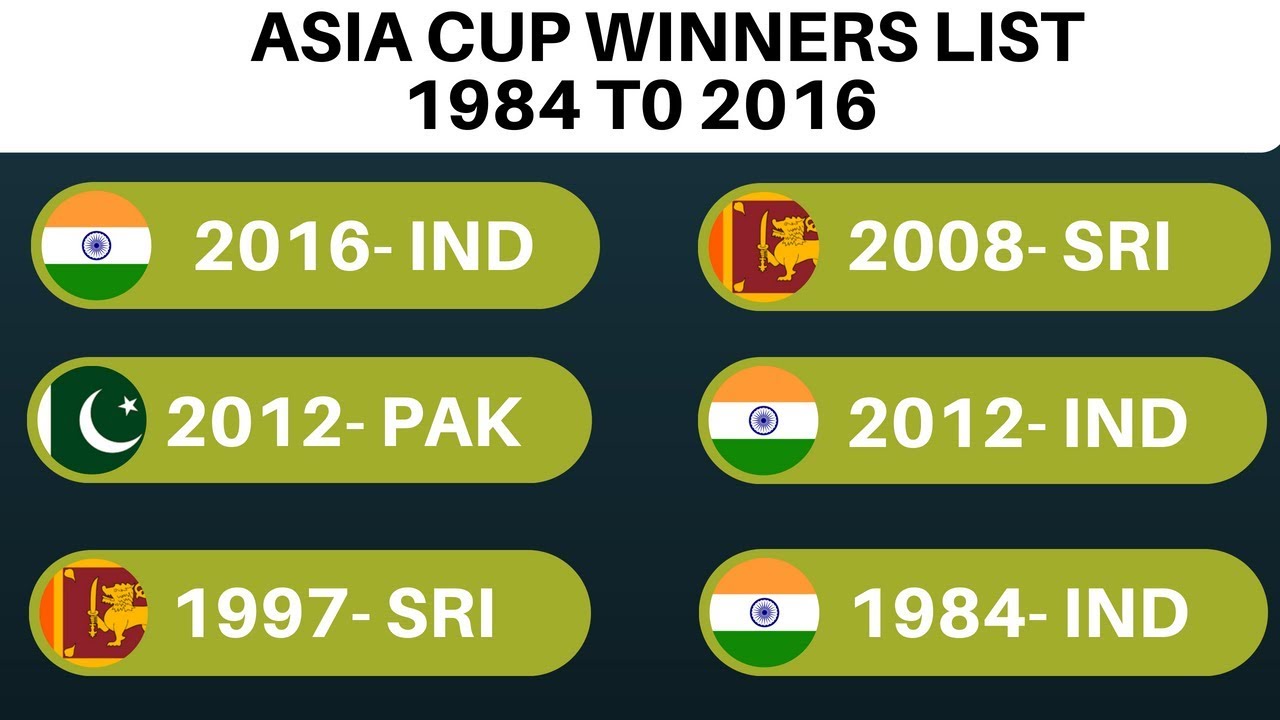 Get Asia Cup Winners List. Updated List of Winners of Asia Cup is available here. Who will win Asia Cup 2022 Prediction? Upgraded list of all past champion teams of Asia Cup along with other necessary details of Asia Cup.

Asia Cup is Asia’s highest Men’s Cricket tournament which is scheduled to be held after gap of each 2 years and was 1st played back in 1984. The top Asian Cricket teams are the participants of this mega cricket tournament whereas this tournament is always hosted by different Asian Countries.

The Asia Cup is organized and supervised by Asian Cricket Council and the basic purpose behind this event is to promote cricket and good relations between all Asian Countries. Currently top 8 Asian teams appear in this event whereas some associate members of ICC also participate in this tournament after clearing through qualification rounds.

The 1st ever edition of Asia Cup was held back in 1984 in Sharjah whereas the year 2020 is going to host 15th successful season of Asia Cup. Former cricket champions India are the defending champions of Asia Cup 2018 as this side had defeated Bangladesh in the Finals by 3 wickets.

Initially Asia Cup involves 50 over format ODI cricket but in 2015 Asian Cricket Council and ICC has decided to downsize this event to T20 format and finally Asia Cup would now be played on rotation basis between T20 and ODI format.

Most Successful Team of Asia Cup

Asia Cup involves some top notch cricketing sides of the world including India, Pakistan and Sri Lanka as all these sides are considered as the most hardcore cricketing teams of the world. Cricket fans has always witness some breath taking competitions in Asia Cup whenever any of these sides appears on field.

Currently 8 cricketing sides are booked for Asia Cup and these teams include Pakistan, India, Bangladesh, UAE, Sri Lanka, Afghanistan, Oman and Hong Kong. All these teams are placed in 2 groups and top two sides from each group qualified for the Semi Finals of Asia Cup.

In `1984 the 1st edition of Asia Cup was held in United Arab Emirates and in that season only 3 sides Pakistan, Sri Lanka and India faced each other. India after reaching Finals defeated Sri Lanka and become the Pioneer Champions of Asia Cup.

The 2nd version of Asia Cup was hosted by Sri Lanka in 1986 and in this season the host nation Sri Lanka has defeated Pakistan in the Finals and become the champions of Asia Cup for the 1st time in the history of this tournament.

Bangladesh has hosted the 3rd season of Asia Cup back in 1988 and in that tournament Indian cricket team has succeed to qualify for Finals and re-take their crown of Champions by defeating Sri Lanka by 6 wickets margin.

In 1990, the 4th Asia Cup edition was hosted by India and in that edition Indian cricket side once again repeated the history as this side defeated Sri Lanka in the Final match by 7 wickets and become Champions of Asia Cup.

The 5th season of Asia Cup was held in UAE in 1995 and India after reaching finals defeated Sri Lanka by 8 wickets and won the title of Champions of Asia Cup for the 3rd consecutive time in the history of this tournament.

Sri Lanka has hosted the 6th version of Asia Cup back in 1997 and the host side succeed to grab the title of Champions by defeated the defending side India in the Finals by 8 wickets and become Asia Cup Champions for the 2nd time.

After gap of three years, the 7th season of Asia Cup was held in Bangladesh and this time Pakistan cricket team created the history by winning Asia Cup for the 1st time after defeating Sri Lanka in the Final match by 39 runs.