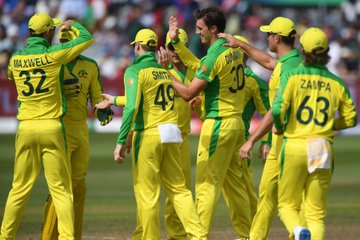 Australia are all set to take on England in the 2nd semi final match for ICC Cricket World Cup 2019. Before this match, Australia finished second in the group stage with fourteen points on the points table. Whereas, England defeated New Zealand by 119 runs in the 41st match and secured the third spot on the points table with twelve points. Now, the 2nd Semi final match Australia vs England will be held at Edgbaston, Birmingham on 11th July 2019.

Australia played nine matches in the group stage for CWC 2019 and they won seven of these games. As a result, they ended up at the second place with fourteen points on the table. Only two times, Australians were defeated in the world cup, first time against India and second time against England. However, after their recent defeat against South Africa in the 45th match by ten runs, it seems impossible for Australia to go in this semi final with their best men. Two of their star payers Usman Khawja and Mark Stoinis have been injured and this is might blow to their team.

However, Australia had a dominating history against England in the ODI’s and World cups and with David Warner and Aaron Finch in form, we will see the supreme form of Australia in this match.

Whereas, England took a zig zag path in their campaign to ICC Cricket World Cup 2019. Had they not won their last two games, we would have seen a different team battling against Australia in this semi final match. Nevertheless, England finished third with twelve points to their name and now they will compete against the might Australians.

Regardless of their campaign the furious form of Jason Roy and Jhonny Bairstow is the positive sing for England to go for this match. In short, we will have a nail biting semi final match today.

Australia will win this match. They were marvelous in the group stage when they defeated every other team and now the time has come for them to qualify for the CWC 2019 finals. However, David Warner, Aaron Finch and Steve Smith must take responsibility and score big innings for the victory of their team. Apart from it, Mitchell Stark will also be a worthy weapon for Australia in this match.

On the other hand, England will be looking forward to win this match. They have never won a world cup title and now the time has come for them to make history. Its a do or die match for them, there is no option. So, Eoin Morgan and his men will give their best to win this match. All in all, this is going to be an epic semi final match between these two arch rivals.