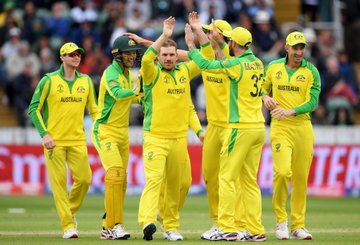 So far, Australia have played eight matches and they won seven of these games. Hence, they account fourteen points at the top spot on the points table. They were the first team to reach the semi finals. In the previous match, Australia set 243 for 7 runs target, while playing first against New Zealand. Usman Khawja scored 88 and Alex Carried marked 71 runs in that innings for Aussies. However, the Kiwi team failed to chase this total and collapsed at 157 in the 43rd over. As a result, Australia won this match by 86 runs. Now, they will face South Africa in this match.

Whereas, South Africa displayed poor cricket in the group stage and they won only two of their eight matches. So, they stand at the eighth spot on the points table and they are out of world cup 2019 title race. It was a very disappointing season for South Africa with many injuries and big mistakes. Perhaps, it is the best time for South Africa to rethink over their batting and bowing options.

The previous ODI stats for Aus vs SA suggest that it is always a close call between Australia and South Africa in the odis. However, Australia are ahead of South Africa with most wins when it comes to the world cup matches.

Australia will win. Since their first defeat against India, they have been consistent in winning matches. They secured their entry in the semi finals and the times has come for their last group stage win. This win will boost their confidence in the semi finals. So, they will be looking forward to win this match.

On the other side, South Africa will be giving their best to win this match. Australia is an old rival for them and this is a do or die match for South Africa. So,we can expect a tough fight from the Proteas in this match. All in all, this is going to be a thrilling world cup match for the cricket fans around the globe.