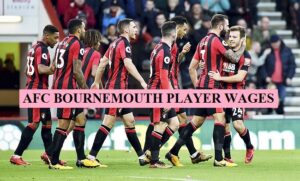 The players salary categorization of AFC Bournemouth shows Jermain Defoe with annual salary of £5,380,000 is placed on the top position followed by Asmir Begovic who earns £3,640,000 annually. Callum Wilson with £3,120,000 salary is the 3rd highest paid player for AFC Bournemouth whereas Connor Mahonay with £624,000 annual salary is the lowest paid athlete of this team.

AFC Bournemouth while spending £30.75 on player’s transfer this summer shows off their craziness towards the upcoming season of Premier League. Bournemouth have made some biggest ever signing with top notch football players including their contract with Nathan Ake for £20.5 million and Asmir Begovic for £10.25 million.

The manager of this team Eddie Howe who earns £75,000 annually seems to recruit some big names into his side in order to elect the best cabinet for his club. One of the enormous signing of Bournemouth is made with Eddie Howe as this transfer deal is set as £19.5 million. Another massive transfer made by Bournemouth is the addition of Jack Wilshere for £15.3 million.

Opposite to last season where Bournemouth spends more than £65.5 million in bringing down nine new players into their team including their contracts with Jordan Ibe for £15.3 million and Lewis Cook for £5.95 million. In current season Bournemouth only hired few senior players in order to strengthen their defense system.