Just In! Sri Lanka once again defeated Pakistan in the second T20 match at Lahore Qaddafi Stadium Lahore to claim the T20 Series. In the second T20 match of ongoing Series, the visitors outsmarted home side by 35 runs and now they are looking forward to whitewash Pakistan at home. A bad day for Pakistani Cricket fans who were excited about the Cricket Returning home.

Earlier, Sri Lanka won the toss and decided to bat first. After the failure of opening batsmen, Sri Lanka find stability in the form of Bhanuka Rajapaksa who scored 77 runs on 48 balls. Later, a 34 runs quick innings from Shehan Jayasuriya helped Sri Lanka get to get to grand total of 182 for 6 in 20 overs. 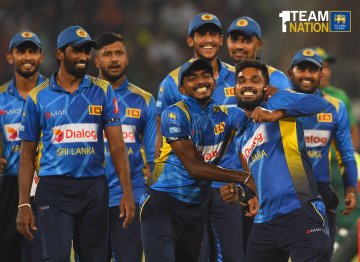 Following their turn, Pakistan again started in a terrible fashion with both openers gone at 11 runs. The middle order in the form of Ahmed Shehzad and Umar Akmal once again failed to provide any reasonable runs. Umar Akmal got lbwed by Wanindu Hasaranga on the very first ball he faced. This is the second consecutive time, when Umar Akmal departured without opening his account. Imad Wasim resisted for a while with his 47 runs innings, but again Pakistan fell short 34 runs to even the Series.

Now, Sri Lanka leads the three match T20 series against Pakistan with 2-0. The last match of Sri Lanka tour of Pakistan will be held at Qaddafi Stadium Lahore on 9th October.