Costa Rica vs Serbia On 17th June 2018, total 3 group stage matches are scheduled in FIFA World Cup 2018 and in 1st match of the day, two hardcore football nations Costa Rica and Serbia from group E will play each other at Samara Arena and the match will kick off at exactly 16:00 Local Time. The upcoming match between Costa Rica and Serbia is going to be very crucial as the winning team of this match will avail an opportunity to grab top position in the group standings and the victory in this match will also enhance their chances to reach the knock out Rounds of FIFA World Cup 2018.

Costa Rica vs Serbia Match Preview Serbia football team have developed themselves as one of the toughest football team in recent few months and their competency caliber will be measured through their previous matches records. Serbia in last few matches performed really well and beat all the odds regarding to their performance. 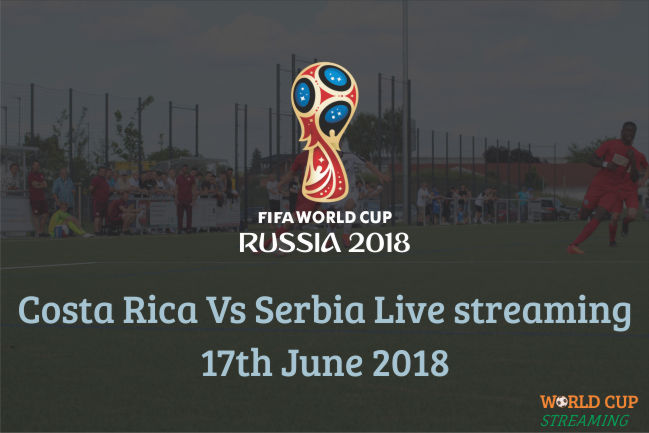 In recent months Serbia had played total 6 international friendly matches and their performance remained above the expectation. Serbia in previous matches defeat Nigeria by 2-0, in other match the counter side knocked out China by 2-0 and their last victory is registered against Georgia by 1-0. Serbia lost their matches against Chile by 1-0 and Morocco by 2-1.

Costa Rica on the other hand of spectrum are still struggling with their poor performance although this team had performed really well in FIFA Qualification Round Matches and just managed to confirm their seat in the main rounds of this mega event of football. The performance of Costa Rica in current season is not much satisfactory as they have only managed to won 2 matches out of 6 they had played recently whereas they had lost 4 international friendly matches and this performance really raise some serious questions on the preparation of this team for FIFA World Cup 2018.

Head to Head Record Well, it is quite strange for all football fans that these two sides have never played each other in the history of football and this is 1st ever chance for both sides to face each other and it is going to be a very tense situation for both teams to meet each other in such big platform of Football where millions of eyes will witness and evaluate their performance so it is going to be a very tough competition between both these teams.

Costa Rica vs Serbia Prediction As far as the prediction of this match is concerned many football analyst are predicting a fighting match between both these teams but still Serbia on the behalf of their brilliant performance in recent matches is considered as hot favorite in this match and their winning rates are quite high in betting market as compare to Costa Rica.