The official squad of Croatia for World Cup 2018 is officially out now and this squad is no doubt a toughest one. This team is looking forward to the mega event under the coaching of Zlatko Dalic, who has been a big star of his own ages.  The official squad of Croatia is based on 23 members that will fly to Russia, but gradually the players will be added in the playing XI or lineup accordingly.

This team qualified for the mega event after finishing at 2nd position in their table during the qualifying round. Zlatko Dalic, their head coach who has quite a vast experience in managing as well as coaching some international football teams along with the clubs in Asia and Europe too. He has been quite in form and active as coach bringing the Croatia national team to World Cup.

Croatia is one of the toughest and hard teams to compete with as they have a strong midfield. Some of 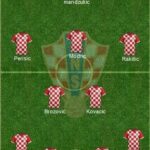 the experienced players like Modric, Brozovic and Rakitic could stay in the midfield, Perisic and Mandzukic may stay at attacking upfront side.  On the other side, Kovacic could stay at midfield along with Brozovic.

While the defense would be occupied by the experienced Srna, Vida, Vrsaliko, Subasic and Coluka. This is the best lineup so far the FIFA world Cup 2018.

The Croatian side will play three matches in the World Cup before quarter final stage. The 1st match against Nigeria on 16th June, 2018 and the 2nd one against Argentina is scheduled. On 26th, 2018 they will face Iceland in their 3rd match.

As you can see in the table given below, the squad is available in detail.