Here we gathered data of Highest Grossing PPV Fights in history (Worldwide) through different reliable sources and public stats. Floyd Mayweather and Manny Pacquiao stands at top of the list in “Highest Grossing Boxing Fights”. That (Floyd vs Manny) fight involved an amount of $4.6 Million with a gross revenue of $410 Million. List of complete fight is mentioned below with details (Facts & Figures).

Due to a big revenue arounding the corner, Floyd Mayweather and Manny Pacquiao’ fight became the highest grossing revenue that earned around $410 Million. That fight also registered another record for gate-receipt of $78 Million approximately.

Mayweather-Pacquiao broke their own record they settled in previous fight by involving a sum of $2.8 Million PPV that generated $150 Million in term of revenue.

Floyd grabbed a money of $200 Million from that fight, but on the counter side Manny Pacquiao earned an handsome amount of $120 Million by taking part in nights fights. All the important and hisorical PPV fights in terms of revenue and income have been mentioned in the table given below. 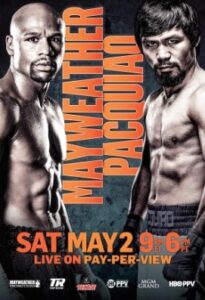 Mayweather has been listed in the top three most lucrative boxing PPV in history. Both, Mayweather & Pacquiao grabbed almost $4.6 million in term of buys and total $410 in term of revenue. The fight between Mayweather and Canelo back in September 2013 witnessed an amount of $154 million in which $2.22 million were collected in terms of PPV, while the total revenue of $150 was collected.

On the other side, fight between Mayweather and Oscar helped to collect a revenue of $136 million. Once again Mayweather-Pacquiao fight was also recorded as the most pirated sports event in history of all times when thousands of illegal houses and media online houses broadcasted it’s live stream. Showtime and HBO struggled a lot in term to stop the piracy, but they failed.