10 Highest PPV Boxing Fights – Buys and Revenue Of All Time. Boxing generates revenue when it comes to Pay Per View Buys. All the action-loving boxing fans are always ready to pay for a good boxing match. However, sometimes when a top bout is on the card, PPV buys record all-time high sales. In this article, we will list Ten Highest PPV Boxing Fights in terms of Pay Per View Buys and Revenue. 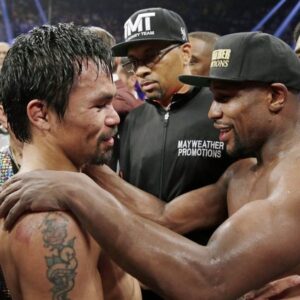 Floyd Mayweather and Manny Pacquiao are considered the two pioneers of the boxing sport. However, the fight between these two boxers was dubbed as the Fight of the Century in 2015.

This bout between the two greatest boxers made 4.6 Million buys on PPV while generating a total of $410 Million in sales. This ranks as the first highest PPV Boxing match in the history of the sport. 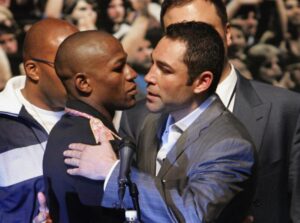 On May 5, 2007, Floyd Mayweather took on Six Division World Champion Oscar De La Hoya at MGM Grand Arena in Las Vegas. The fight lasted for 12 rounds and Mayweather came up as the winner as per decision.

However, this fight counted 2.4 Million PPV buys breaking an old record. Hence, it is ranked as the 3rd highest PPV Boxing match in history. 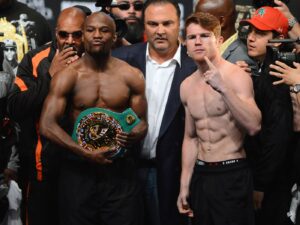 In 2013, The Pretty Boy had a fight against WBA Super Welterweight Champion Canelo Álvarez. This fight lasted for 12 rounds and as per expectations, Mayweather won the fight.

In sales, Floyd Mayweather v Canelo Álvarez generated 2.2 Million while making a total revenue of $ 150 Million. This is the fourth highest Pay Per view Selling match in the history of boxing. The ’90s were the era mostly dominated by Mike Tyson in boxing Sport. However, Mike lost two back-to-back matches against Evander Holy Field in 1996 and 1997. In Mike Tyson V Evander Holyfield II a rematch of the first fight between the two boxers, Evander dominated Tyson in the first three rounds. That made Tyson so infuriated that he bites on the top corner of the right ear of Evander. This act disqualified Tyson from the fight and Holyfield came up as the winner.

Despite the controversial victory,  Mike Tyson V Evander Holyfield II set a record (at that time) of 1.99 Million Sales on PPV. Thus, this fight counts as the 5th highest PPV Boxing match in our list. 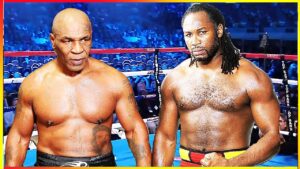 Even though, after the controversial fight against Evander Holyfield, Mike Tyson was being loved by his fans. In 2002, Mike Tyson ranked as 1 Heavyweight Champion met Lennox Lewis and the titles of WBC/IBF/IBO/The Ring/lineal heavyweight were underlined. Lennox dominated in the early rounds and game-winner in the 8th round. Hence, claiming all the underlined titles. This fight recorded a sale of 1.59 Million on Pay Per View. Hence, we count this fight as the 7th Highest PPV Boxing match on our list. 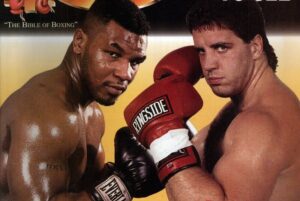 In 1995, Mike Tyson v Peter McNeeley took place at MGM Grand Las Vegas, Paradise, Nevada. This fight only lasted for 89 seconds and Tyson came up a winner as a result.

Mike Tyson v Peter McNeeley marked the return of Tyson after four years. Thus, generating 1.55 Million sales on PPV. This is said to be the eighth highest PPV selling match in the history of Boxing. There is a reason why they called Floyd Mayweather “Money”. You should not be surprised to see him on our list again and again. Eight counts and he is back again on our list. In 2012, Floyd Mayweather buckled up against Miguel Cotto with WBA Super & WBC Diamond Light middleweight titles on the line at MGM Grand Garden Arena in Las Vegas, Nevada. This fight lasted for 12 rounds and The Pretty Boy was declared the winner by unanimous decision.

The Fight recorded 1.5 Million sales on PPV. Therefore, it is listed as the 9th highest Grossing Boxing Match in terms of Pay Per View Buys. 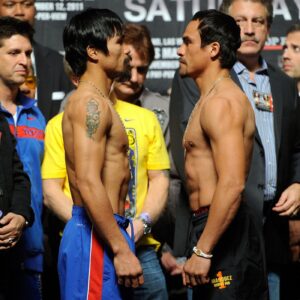 Thus, this is the 10th and the last highest PPV Boxing match on our list.