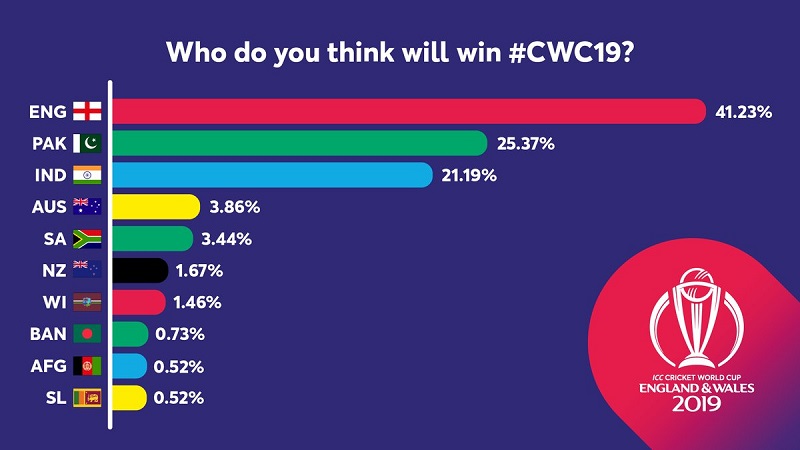 Team India has won the World Cup for two times in 1983 and 2011. Kapil Dev lead the furious team in Cricket World Cup 1983 that won that season of Cricket World Cup. However, after that, India failed to claim the CWC trophy for next two decades. But in 2011, Under the command of MS Dhoni India once again lifted the Cricket World Cup trophy. But, in the next year, the lost it to Australia.

There is so much potential in Team India to win this season of Cricket World Cup 2019. The batting order looks good with Shekhar Dhawan, Rohit Sharma, Virat Kohli and Ambati Rayadu. However, their are some loop hopes in the bowling department. Jasprit Bhumrah is good to lead the bowling attack for Team India in CWC 2019. But still, their are some areas which team India needs to improve in World Cup 2019.

However, Team Australia has struggled in the past few months to claim any big victories. Though, the bowling side looks good with the likes of Pat Cummins and Marcus Stoinis. But, the batting order is under pressure from past few months. Cricket Australia needs to find best batting options available for Cricket World Cup 2019.

There was a time in the world of Cricket, when every cricket team feared the mighty Caribbeans. For they won the first two season of ICC Cricket World Cup tournaments in 1975 and 1979. However, that time is long gone and now after four decades, West Indies is still unable to claim Cricket World Cup Champions title, which once belonged to them.

Jason Holder is expected to be leading the West Indies team in this season of Cricket World Cup. In the past few series, we have seen a stronger West Indies batting side with the likes of Shai Hope and Hethmeyr. Moreover, the positive sign for Windies is that Chris Gayle has gotten back its furious batting form. However, the bowling sides is which Cricket Windies will be addressing in their meetings before Cricket World Cup 2019 matches.

May be West Indies will win ICC Cricket World Cup 2019. What Do you think?

The Green Shirts have qualified to compete opponents in ICC Cricket World Cup 2019. After the 2016, the Green Team have stunned the Critics with their classic performances in cricket matches. To begin with, ICC Champions Trophy 2017, final was an epic show when Pakistan team defeated their long time rivals team India to claim the title. Following that, they won notable series in the overseas tour.

Pakistan have won ICC Cricket World Cup for one time only in 1992, when the current Pakistan Prime Minister Imran Khan lead Pakistan to the finals. However, this year Sarfraz Ahmed will be leading Pakistan cricket team in CWC 2019, under whom Pakistan also won ICC Champions Trophy 2017. The likes of Fakhar Zaman, Imam ul Haq and Babr Azam along with Shahen Afridi, Mohammad Amir and Junid Khan will make it tough for the opponent teams in Cricket World cup 2019.

How is your take on Pakistan winning the ICC Cricket World Cup 2019?

The Cricket World cup 1996 was the most joyful moment for the Lankan cricket fans, when Sri Lanka lifted the CWC trophy under the command of Arjuna Ranatunga. Since then, Sri Lanka have not been so perfect. This year, Sri Lanka will be battling in Cricket World Cup 2019 among other team in the captaincy of Lasith Malinga.

The recent overseas tour of Sri Lanka have not been so fruitful. Not to mention the five match ODI series defeat against England at home. However, Sri Lanka will challenge strongest opponents with the likes of Kusal Perera, Kusal Mendis and Niroshan Dickwella. Malinga himself will lead the pace attack of Sri Lankan bowling line up.

The Bengal Tigers have impressed the Cricket Pandits by their mind blowing performances over the years. They are considered to be not an easy target and will always make it difficult for other team to move forward in Cricket World Cup campaigns. They have the best openers in the form of Tamim Iqbal. Moreover, Mushfiqur Rahim will add strength to the middle order for Bangladesh team.

Though, the Bangladesh team have never won the Cricket World Cup final match. But this year, Bangladesh will be one of the strongest opponent to face in CWC 2019.

The Proteas are one of the most unlucky teams to never win a world cup final. Though, the South Africa have always given marvelous outcomes in the ODI cricket, but it is very unfortunate for them to not win a world cup trophy. This year, Fuf Du Plesis will command the strong South Africa team in Cricket World Cup 2019 and the likes of Quinton De Cock and Hashim Amla may win this world cup for South Africa.

The Kiwi are always one of a hell competitors in World Cup matches. But, likewise South Africa, they yet have to lift World Cup trophy. Their recent ODI tours have been quite a watch and Kane Williamson is expected to lead New Zealand in Cricket World Cup 2019. Batting giants such as Colin Munro and Martin Guptill will give their best to win this season of Cricket World Cup for New Zealand.

Despite inventing the gentleman game of cricket and hosting many mega cricket tournaments such as Cricket World Cups, England have never made it to the Cricket World Cup champions. Though, they have always given their best on the field, but it is saddening to see our Englishmen not to win a World Cup final match.

This year Eoin Morgin will lead a perfect England team into the Cricket World Cup 2019. Moreover, Joe Root and Alex Hale will try their best to win the first ever World Cup trophy for England.