India fights back in the final ODI match of the five match ODI series against New Zealand, after a horrific defeat at Seddon Park, Hamilton. Hence, India took away the ODI series trophy with the stats of 4-1. Earlier on, India set a total of 252 for 10 in 49.5 overs. This innings was powered by a whooping 90 runs from Ambati Rayudu, who build the Indian innings with his responsible batting. Vijay Shankar and Hardik Pandya too played their part while hitting 40+ runs each. 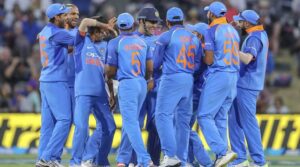 New Zealand needed 253 runs to win this match. However, early shocks let them no choice but to resist Indian pace attack and stay for a long while on the crease. Only, Williamson and James Neesham played their part in New Zealand batting, while other batsman struggled to score. New Zealand fell short 35 runs to run downed the total. Hence, India won the match by 35 runs.

What a tour for India it was?

Now, Men in Blue will play a three match T20 series against Kiwis which will be starting from 6th February at Westpac Stadium, Wellington.