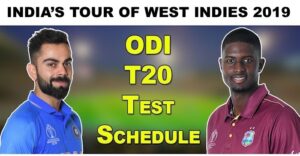 After departing from CWC 2019 with a satisfactory campaign, India now visits West Indies to play three T20 International, three One Day Internationals and two test matches. India tour of West Indies 2019 will be starting from 3rd August and it will continue until the 3rd September 2019.

Prior to this tour, India finished at the top in the group stage for World Cup, but lost 1st Semi final against New Zealand by 18 runs. Whereas, West Indies came ninth in the group stage with only five points to their name in nine matches. So, it will be interesting to see, how these two sides patch up against each other in this tour.

However, In the T20 format, the two sides of India and West Indies in head to head games with five victories to each side in eleven matches. Hence, with previous stats going against India, it is going to be a tough tour for Team India in West Indies.

The full schedule for India tour of West Indies 2019 will be as: