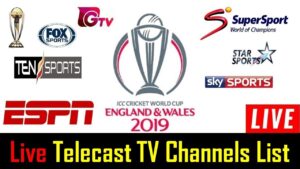 After an unfortunate campaign in CWC 2019, the time has come for India to visit West Indies for a cricket series. India will play three T20 Internationals, Three ODIs and two test matches in this tour. All these matches will be broadcast live at the official TV Channels, that have already acquired the broadcast rights for this tour. Sony Six and Sony ESPN are the official Broadcasters for this India tour of West Indies 2019. Apart from it, many other TV Channels have also attained the live telecast rights for this series. We have compiled a list of all these TV Channel, which will bring live coverage for India vs West Indies matches.

You can check this list to know, which TV Channel will live broadcast India vs West Indies live matches in your country?

Sony Six is an India sports TV Channel which is owned and operated by Sony Network in India. Usually, this Sports TV Channel telecasts cricket, football, mixed martial arts, wrestling, badminton, rugby and basket ball matches. However, Sony Six have purchased the live broadcast rights for India tour of West Indies 2019 live matches in India. Therefore, it will be live telecasting India vs West Indies 2019 matches in India and Subcontinent countries (Sri Lanka, Afghanistan, Nepal, Bangladesh, Pakistan, Maldives, and Bhutan). So, if you are living in India and want to watch West Indies vs India live matches on TV, we suggest you should watch Sony Six on your TV Screens.

Apart from it, India vs West Indies live cricket streaming, match analysis and post match highlights will also be available at the Sony Six’s official web portal of SonyLiv.

Ghazi TV which is also known as GTV, is a digital cable television channel in Bangladesh. On usual days, GTV broadcasts a variety of TV Programs such as movies, news, talks shows, dramas and cricket in Bengali language for the the Bangladesh TV viewers. However, GTV has purchased the live telecast rights to bring India vs West 2019 live matches in Bangladesh. So, if you are a Bangladeshi citizen and want to enjoy West Indies vs India live matches on your Television screen, we advise you should switch your TV Screen to Ghazi TV.