Virat Kohli has just become the fastest Batsman in ODIs to complete 10 thousand runs. Virat made this record today against the West Indies with a magnificent hundred. He is considered another legend in making after the Master Sachin who retired few years ago from International cricket. 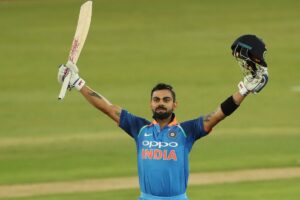 Kohli was Born in 1988 in India. He is 28 years old and recently got married with Indian actress Anushka Sharma. Though, he could not play in Asia Cup, due his honey moon vacations, but he made his come back with a marvelous century against Windies in the previous ODI match.

Virat marked this goal in just 213 ODI matches with a average  of 59.24. He has 60 hundreds combined with Test and ODI format. The Cricket legends are praising MR Kohli for achieving this huge milestone.