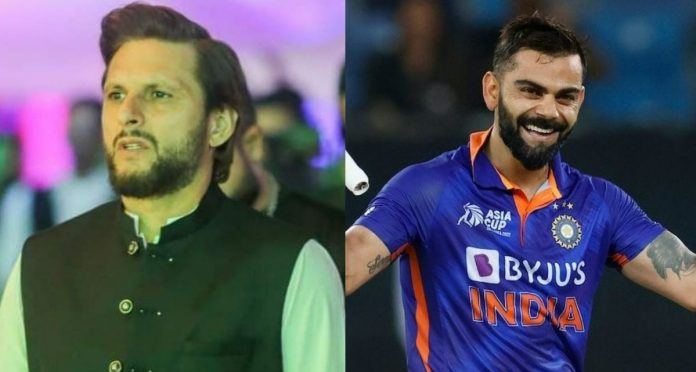 Just In: Former Pakistan skipper Shahid Afridi gives retirement advice to Kohli, saying that Virat Kohli should end his cricketing career on a high rather than being dropped out or criticized due to a lean patch.

The 34-year-old all-rounder Afridi said, “The way Virat Kohli has played, the start that he had in his career, he had overcome difficult times and work hard before he made a name for himself. He is a champion, and I believe there comes a phase when you start thinking about retirement. At such a stage, Kohli’s aim should be to announce retirement on a high”.

“Kohli should avoid reaching a stage where he is dropped from the team. Instead, retirement should be announced when you are at your peak cricketing career. Very few cricketers, especially from the Asian region make that decision, but I feel when Kohli does it, he will do it in a good way and hopefully end his career in a style much like the way he started his career”, he concluded.

Despite gaining the title of 2nd highest run scorer in the Asia Cup, Virat Kohli is in hot waters due to his lean performances. The batter bowled out without scoring a single run during a crucial Super 4’s match against Sri Lanka.

However, the Indian Cricket Board is committed to bringing Kohli back in form as they have named him in the India squad against Australia, while Kohli will also be in India Cricket Team for the upcoming T20 World Cup 2022.