Leicester City having net worth of £51,61 million is looking forward to extend their annual wage bill of season 2018-19 to £75 million and this huge splash of money includes recruitment of some new faces in this team. As James Maddison from Norwich FC will join this team for £22.50 million whereas Ricardo Pereira with £19.80 million contract is considered as the 2nd highest paid athlete of this team. 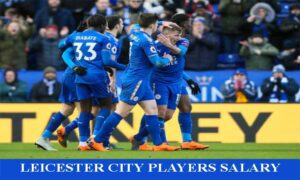 Jonny Evans with £3.60 million contract is another expensive choice of Leicester City for current season whereas Ahmed Musa after extension of his contract is earning £12 million and Namplays Mendy after prolonging his deal enabled to extend his salary to £9 million while Bartosz Kapustka is making around £5.5 million annually.

Leicester City had earned £93 million after winning Premier League title back in 2014-15 and this massive amount helped them to make some expensive signings including their contracts with Jamie Vardy who earns £80,000 per week and Riyad Mahrez for £55,000 weekly. Leicester City also earned 71.6 million from Premier League TV sponsors and enabled to extend their annual wage bill from £36.6 million to £48.5 million.