Manchester City is having top flight annual expenditures of £200 million this season as the side is going to break the bank by signing some of the most expensive athletes including their record deal with Riyad Mahrez for £60 million whereas Benjamin Mendy has arrived in this team for £52 million and Kyle Walker with £46 million contract is the 3rd highest paid footballer of this team. 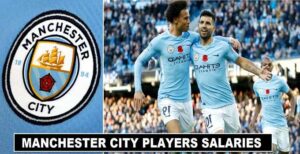 Some other interesting recruitments of this club include their contract with Bernando Silva for £45 million whereas Enderson will join this team with £36 million deal. Manchester City spent £27 million to bring down Danilo in their squad for £27 million whereas Douglas Luiz also joined City for around £10.8 million.

Manchester City has also earned £60 million by transferring some of its major players to different clubs as Kelechi Iheanacho, Enes Unal and Aaron Mooy moved out from the current squad of City. As per reports Man City spent around 70{2c57283f43f9b3b7e6eaef82251cdaa74f0a0183bf679d77fcdffc6e96ea4b45} of their annual profit on players salaries as with £10,000 weekly wages, Patrick Roberts is the least paid athlete of this team.