Top 10 Most Famous Cricketers with Mustaches 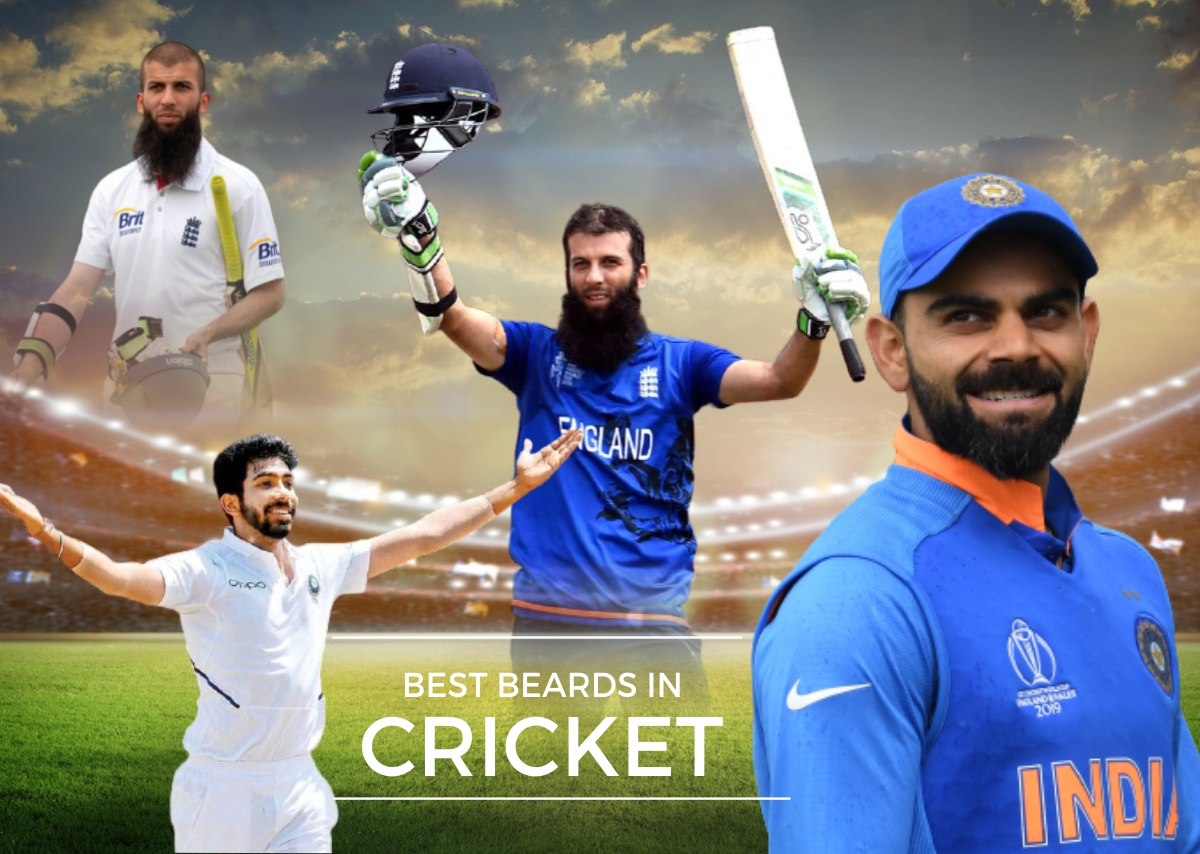 Cricket has come a long way from white dresses and hockey alike bats to the colored uniforms and modern-day bats. In this evolution, cricketer’s fashion and style sense have also revamped. Like all men, many cricketers have also been fond of the mustaches. So we look down on our list of Top 10 Most Famous Cricketers with Moustaches.

A cricketer grows a mustache so he can gleefully twist it around and execute its aggressive plan in the game of cricket. Moreover, cricket is a Gentleman’s game, and all the Gentlemen wear a mustache.

Most Famous Cricketers with Mustaches

Unlike in the past, Mustaches are slowly vanishing away from the cricket. Modern-day Cricketers have an up-to-date approach in their facial appearance. For example, Lasith Malinga loves to have curly hair, and Chris Gayle has braided dreadlock Hair. However, few like Mohammad Hafeez and Shekhar Dhawan still keep mustaches like the old school cricketers. Here in this post, we will look at the most famous cricketers with mustaches. 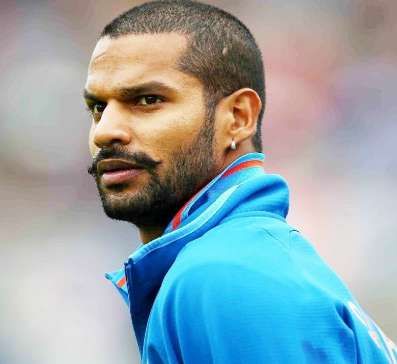 Shikhar Dhawan is a present-day cricketer who opens for India in the International Cricket matches. He is also nicknamed Gabbar due to his chivalrous mustaches. Shikhar was born on 5 December 1985 in New Delhi, India.

His role in the Indian Cricket team is that of a Left-handed opening batsman. At the age of 12, he trained at the Sonnet Club under the coaching of Tarak Sinha. He made his First-Class debut in 2004 for Delhi in Ranjhi Trophy.

Shikhar made his international debut against Australia in an ODI match in 2010. To this date, he has scored 8,292 runs in International Cricket with 24 hundred. He was also the leading run-scorer for India in ICC World Cup 2015.

He is known for his audacious mustaches among Indian Cricket fans. So, he takes the top spot on our list of Top Cricketers that grow mustaches. 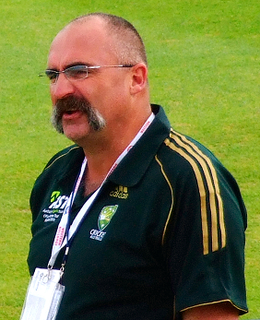 Mervyn Hughes is a former Australian cricketer who played for his country between 1985 and 1994. His friends called him Fruitfly due to his mincing run-up that often stretched to 45 paces. He participated in International matches as a specialist bowler for his team.

He played 53 tests and 33 Odis for Australia in his career. He accounts for 212 test wickets with a bowling average of 28.38. His bowling career is decorated with seven fifers and a ten-wicket haul.

Hughes had a Handlebar mustache, and he often displayed affectionate behavior towards his teammates. He holds 2nd place on our list of Cricketers that kept mustaches. 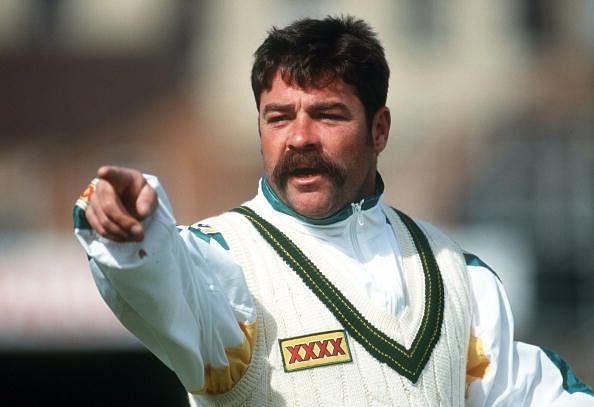 David Boon is a former Australian Cricketer who represented his country in international cricket between 1984 and 1996. Born on 29 December 1960 at Launceston, Tasmania, Australia, he was given the nickname of Boony. He played as a batsman in his career. However, he was occasionally called into bowling as well.

He played 107 tests and 181 ODI matches for Australia. So, he accounts for 7,422 runs with a good average of 43.65. His international career is embellished with 21 test centuries.

Boony is well known for his portly figure and distinctive mustache among Australian cricket fans. Therefore, we list David Boon on the 3rd spot on our list. 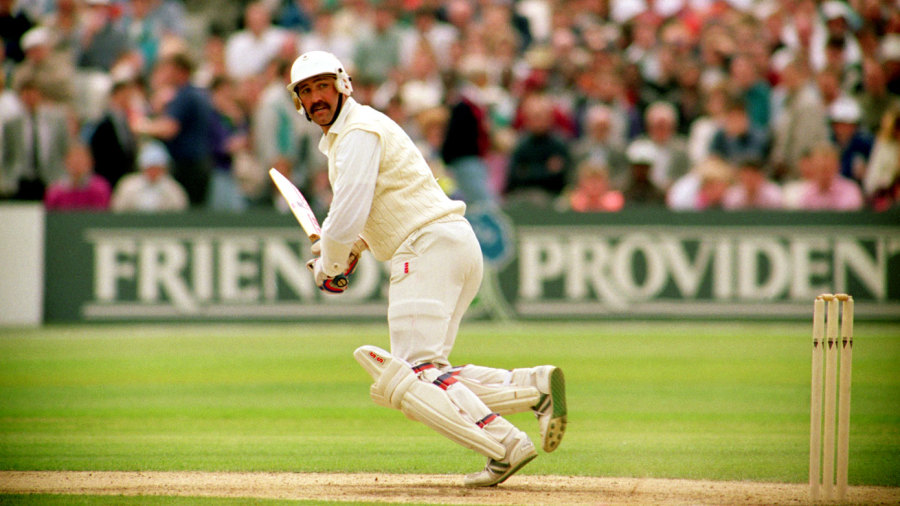 Graham Gooch is a former England cricketer who played first-class cricket for Essex and captained the national cricket team of England. Gooch was born on 23 July 1953 at Whips Cross, Essex, England. Nicknamed Goochie, he is said to be one of the leading scorers of his generation.

The International Cricket Council inducted him into the ICC Hall of fame in 2009. He got the nickname Zap due to his Zapata mustache. Thus, we list Graham Gooch in the 4th place in our list of Notable Cricketers with Moustaches. 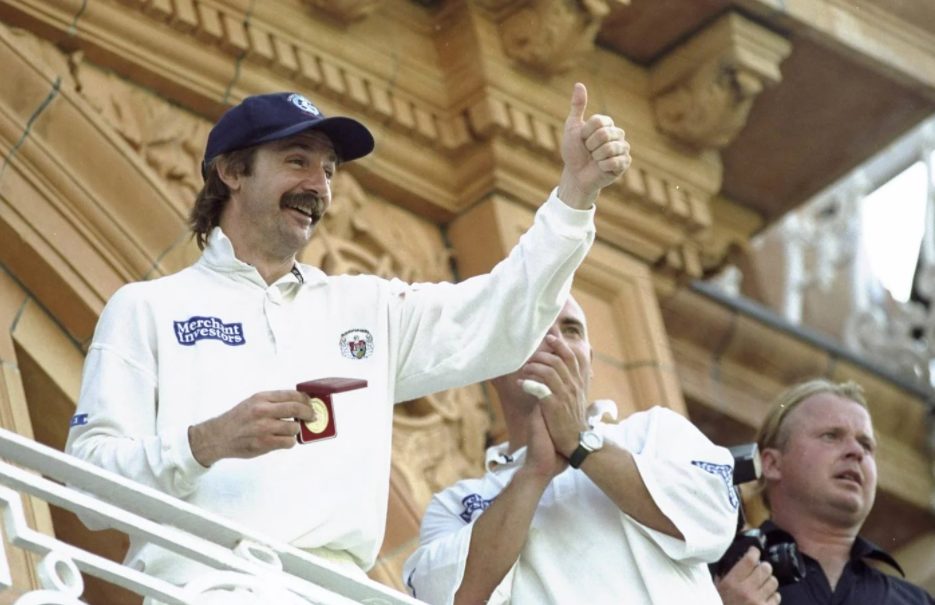 Jack Russell is a former Cricketer from England who attended International Cricket for his country between 1988 and 1998. He was born on 15 August 1963 at Stroud, Gloucestershire, England. At a young age, he opted to keep wickets for his school team.

He debuted for England in the ODI format on 22 November 1987 against Pakistan. In 1990, Wisden listed him in the five cricketers of the year. He played 54 tests and 40 ODIs for England. Though his batting career was not that impressive, he is considered one of the finest Wicket Keepers of all time.

Jack had an exciting Character with a love for art and a big mustache on his face. Therefore, we list down Jack Russell at the 5th spot on our list. 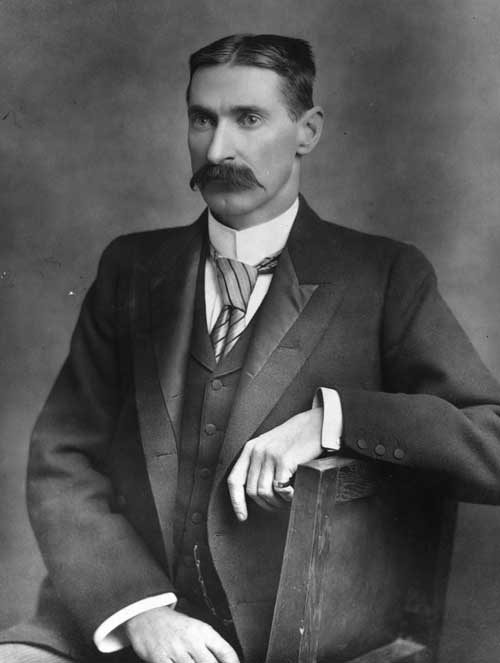 At number 6th, we have Fred Spofforth, another Australian cricketer who played international cricket for his nation from 1877 to 1887. He is regarded as Australia’s finest Pace bowler of the 19th century. He was nicknamed The Demon Bowler due to his fast bowling.

He was the first-ever cricketer to pick a hat-trick in 1877. Born on 9 September 1853 in Balmain, New South Wales, Australia, he debuted for Australia on 31 March 1877 against England.

He took 94 wickets in 18 test matches with a good average of 18.44. His bowling career sparkles with seven fifers and four ten wickets haul. He was tall and a mustache on his face. His bowling created fear in the hearts of the opponent team. 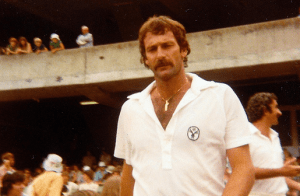 Dennis Lillee is a former Australian Cricketer who played international cricket for his team between 1971 and 1984. He was nicknamed FOT (Flippin old Tart) by his teammates. He is well known for his fierce temper and never-say-die attitude among cricket fans.

Lillee was tall and had a mustache on his face that gave him an angry look. When he retired, he had the record of most test wickets at that time. We place Dennis Lillee at the 7th slot on our list.

Rod Marsh is also another Former Australian Cricketer who makes upon the list. His International Career lasted from 1970 to 1984. Marsh was born on 4 November 1947 in Armadale, Western Australia. He was nicknamed Bacchus and Iron Gloves by his teammates.

He played 96 tests and 92 ODIs in his international career for Australia. He was good behind the stumps, and he holds the record of most wicket-keeping dismissals of 355.

He had an incredible career as a wicketkeeper for Australia. Now, he takes 8th place on our list of Cricketers with mustaches. 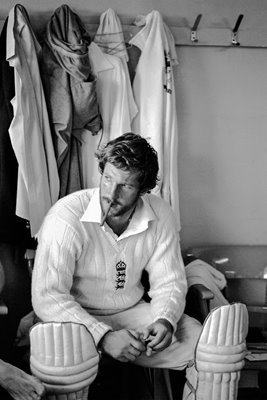 Legendary English Captain Ian Botham also had a mustache to suit his stature, and he takes the 9th spot on our list. He is hailed as one of the greatest all-rounders of all times. He was born on 24 November 1955 at Heswall, Cheshire (now Merseyside), England.

He had long hair and a small mustache on his face. Therefore, he deserves to be on our list of well-known cricketers with mustaches.

Mohammad Hafeez is a present-day cricketer from Pakistan. He is a top all-rounder who is always present in Pakistan’s playing XI team. He is versatile and keeps a mustache to suit his personality.

Born on 17 October 1980 in Sargodha, Pakistan, he is nicknamed Professor by his teammates and fans. He debuted on 20 August 2003 against Bangladesh. So far, he has played 55 Tests and 218 ODIs for Pakistan.

He has scored 10,000 runs and completed 200 wickets in his international career. MR. Professor can bat anywhere in the top 6 order of the batting. He can play aggressive cricket when needed and keeps a mustache on his face.

So, he takes the 10th spot on the list of Well known cricketers with mustaches.

So, here is our list. Who do you think should be on our list? Let us know in the comments.