Just In! New Zealand have qualified for the CWC 2019 with a stunning victory over India in the first semi final. The Kiwi team beat India by 18 runs and reached the ICC Cricket World Cup 2019 final. Now, they await for their competitors, which will be either England or Australia. 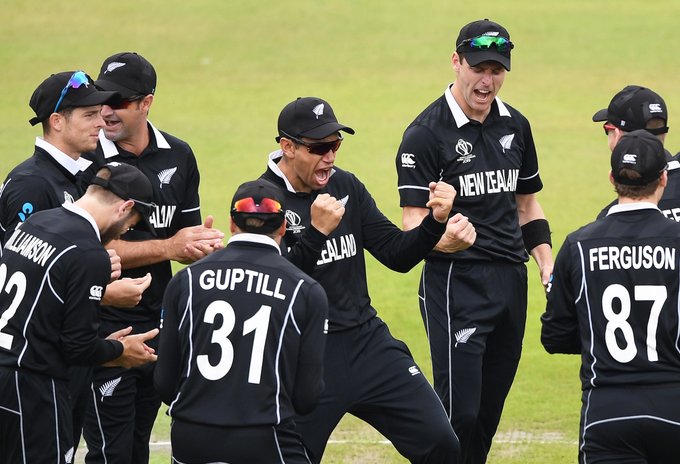 The umpires realizing the weather threat, called off the match for the day and New Zealand were to continue from 211.

On 10th July, the reserved day for the first semi final match, New Zealand resumed their batting and reached 239 for 9 at the end of 50th over. Now, India had to chase 240 runs in 50 over.

Shockingly, India begun their innings with a worst possible start. Rohit Sharma who scored five hundreds in this ongoing world cup, was dismissed by Matt Henry, after scoring one run. Soon, his partner Lokesh Rahul too joined the Sharma, after he just opened his account. Surprisingly, Indian skipper Virat Kohli who is considered to be a run scoring machine, was too caught after marking his bat. As a result, India were left struggling at 5/3 in the third over.

Dinsesh Karthik, who were lifted up in the Indian batting line up, was picked up by Matt Henry. It was all MS Dhoni and his partner Hardik Pandya now. Pandya resisted for a while on the crease, but he too had to give away his wicket to Mitchel Santner.

However, the new comer Ravindera Jadeja had already made up his mind, as he waited no more and started hitting boundaries after he landed up on the crease. Jadeja struck 77 runs on 69 balls and gave hope to the praying Indian cricket fans. After his dismissal, Dhoni was left no choice but to look for boundaries.

Unfortunately, the best finisher in the world was run out, after he tried for to score a double. In the end, India were summed up at 221 in the 49th over. As a result, New Zealand won this match by 18 runs.