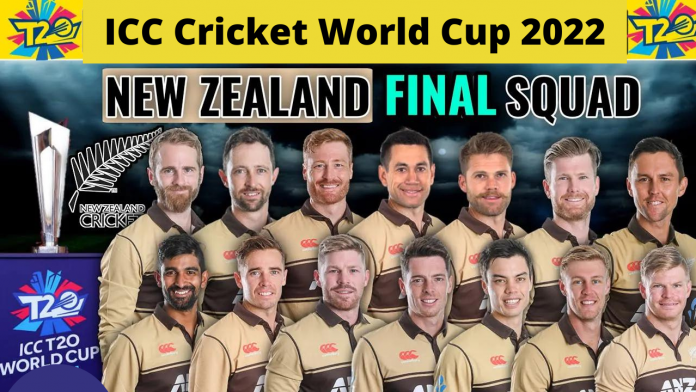 New Zealand Cricket have announced their Team squad for T20 World Cup. The 7th season of T20 WC is taking place in Australia from 16th October 2022. New Zealand are among the few teams to announce their team squad way ahead of T20 World Cup.

As per the announcement, Kane Williamson will captain New Zealand in T20 WC. He had a balanced team to lead in the tournament, consisting of young and experienced cricketers. You can check New Zealand Team Squad For ICC T20 World Cup here on this page.

Finally, the moment have come for all those die-hard New Zealand Cricket fans who were waiting for NZ T20 WC squad to be announced. Well, the New Zealand cricket has raise the curtains and it appears, Kane Williamson will Skipper New Zealand in T20 World Cup. What a News?

New Zealand have long been preparing for the mega stage of T20 World Cup. They invited Bangladesh at home for a three match T20 series and outclassed the visitors by a 3-0 score. Then, they traveled England for a test series and now they are in Bangladesh as we speak. 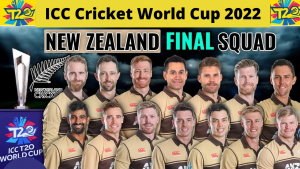 New Zealand tour of Bangladesh ahead of T20 World Cup started with a shock when the visiting side were outsmarted by the Bangladeshi cricketers in the 1st T20 match. The Kiwi Cricket Team were bowled out one of the lowest totals in their T20 cricket history.

New Zealand are one of eight top sides that have straightly qualified for the T20 World Cup  Super 12 stage. They are placed in the Group 1 of Super 12 stage among England, Australia, Afghanistan and two other qualifying teams from the Round 1 Stage.

New Zealand will meet Australia in their first clash on 22nd October 2022 at Sydney Cricket Stadium, Sydney. Here is the list of all New Zealand Cricket Team matches in T20 World Cup.

This could be an alarming situation for New Zealand Cricket, who are eyeing on their first ICC T20 Cricket title in October and November. Perhaps, New Zealand took Bangladesh tour in a light sense and sent their B Team. Their T20 World Cup squad consists of some of the best cricketers in the world.

New Zealand are one of the unfortunate teams in T20 World Cups, that despite making it to the semi-finals for two times, were not able to claim the title. The Kiwi team qualified for the semi finals in the inaugural season of T20 World Cup 2007. However, they were defeated by Pakistan in the 1st semi final by 6 wickets. Thus, they could not proceed further in the tournament.

Nevertheless, T20 World Cup could be a big opportunity for the New Zealand. They already are the Test World Champions, Why not T20 World Title? However, Kane Williamson and his Men will need to be smart and swift to execute their plans against the top two teams India and Pakistan.

The Australia and England are the two main threats for New Zealand ahead of knockout stage. If Kiwi teams tackles them with ease, they can qualify for the Semi Finals. However, Afghanistan and the two other qualifying teams from the Round 1 stage will not be an easy challenge either.

All in all, T20 World Cup is a grand opportunity for New Zealand cricket team to make proud their long awaiting cricket fans.

Starting with the captain, Kane Williamson himself who lead the New Zealand to the first ICC Test World Championship title in the history. He has a cool and calm mind when he is on the field and he knows how to execute his game plan.

Kane Williamson is captaining a Talented New Zealand T20 cricket team which will be a treat to watch in the tournament. Williamson is likely to open with his partner Martin Guptil who has already joined the most sixes in T20 World Cups with his stats.

Whereas, the bowling department of New Zealand cricket team is in charged by Trent Boult who is one of the most deadliest bowlers today in cricket. Whereas, two of the Highest wicket takers in T20 World Cups Ish Sodhi and Mitchell Santner also provide the back support in the bowling side of New Zealand Team Squad.

Over all it is a well balanced team squad and a satisfying note to the New Zealand Cricket fans. Let’s see how Kane Williamson XI roles down in T20 World Cup.