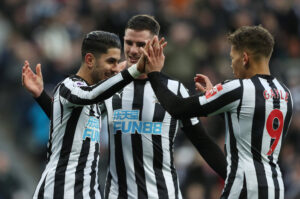 Jonjo Shelvey with £70,000 per week is considered as the highest paid athlete of this team whereas Aleksandar Mitrovic is earning £60,000 weekly while the Spanish forward Ayoze Perez is getting £45,000 per week. Matt Ritchie and Mohamed Diame are also earning in the same range after extension of their contracts till 2021 and 2019 respectively.

Newcastle United will make two new transfer windows this season as Martin Dubravka will join this team for £4 million whereas Fabian Schar will become their part for £ 3 million. United will also earn around £18.20 million in context of departure of its two major players as Chancel Mbemba will move to FC Porto for transfer sum of £7.20 million and Mikel Merino will play for Real Socieded for transfer amount of £10 million.

United media income also fell to 47.4 million in 2017 from £72.7 million in 2016 as in last season Newcastle just received £2 million from TV revenue whereas the other sides of that event were awarded near to £7 million. The interest free loans of Newcastle United also raised to £144 million as the owner of this club put an additional loan of £15 million for this season.