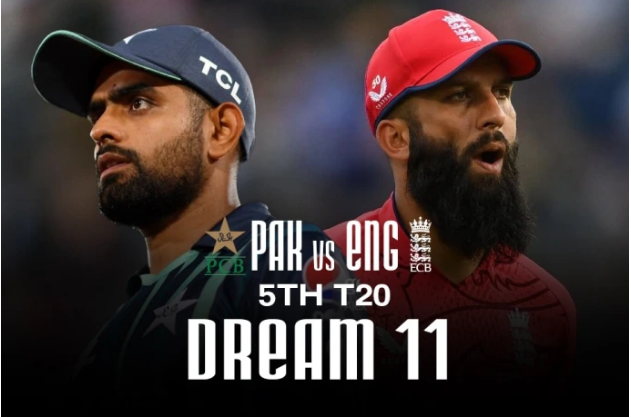 Team Pakistan finished the Karachi Leg on a winning note and evened the seven T20 match series by 2-2. Now, the final three games of this tournament will be played in Lahore. On September 28, Pakistan and England will play their fifth Twenty20 match, and both teams will undoubtedly strive to gain the upper hand by playing relatively strong cricket.

Baber-led Pakistan’s aggression and well-being during the fourth T20 match astounded every spectator. In the decisive last over of that game, Men in Green triumphed after capturing three wickets just as the English team was about to win. Haris Rauf, who was named the game’s best player, naturally bowled rocket-like deliveries that were all around 155 km/h.

In comparison, the English side has failed to reach the target below 170 runs for the first time in the past two years. It is, in fact, somewhat embarrassing for the team that is ranked first in the world. Even though they played their best cricket in that game, but failed. Indeed, the credit goes to the Pakistani pacers, whose unbeaten bowling skills successfully struck the host side from crossing the victory line.

Pakistan will square off against England in the 5th T20 match of their ongoing series on September 28 in Lahore. Notably, Men in Green snatched victory from England’s hands during the final game of the Karachi Leg, tying the seven-match T20 series at 2-2. Now, both playing sides will come off with full strengthens to gain a leading role in this event by winning the upcoming game.

The English Cricket Team didn’t anticipate the Pakistani camp playing that well. Of course, they were only a few millimeters away from winning when Men in Green put up an impressive performance by bowling and dragging them. The series is even, but things are still under control, and the England squad will be looking to regain the initiative.

On the other hand, Baber-led Pakistan would be pleased with their impressive cricketing show at Karachi. However, their middle-order batting issues are evident, and they need to work on them. Throughout the series, the whole squad relied on the opening pair, Rizwan and Baber, but none of the batters among Khusdil, Haider, and Iftikhar grabbed their chances.

The Pakistani team is the clear favorite to defeat England in the forthcoming match. Pakistan has a problematic batting order, but it has the best bowling squad in the world, and that is typically the turning point for most teams. The English team’s odds of victory increase to 80% if they manage to score 180 runs or more.

The English team will be captained by Moeen Ali, who undoubtedly led the inexperienced English team in the right way. While, the Men in Green will advance down the field under the leadership of Baber Azam, an accomplished and seasoned captain.