Pakistan Women defeat West Indies Women Cricket team in the third and final T20 match by 12 runs in the ongoing T20 series. Whereas, the Caribbean Women took away the T20 series with a 2-1 stats. Previously, the Windies girls won the first T20 match by 71 runs. However, the second T20 match was tied, but once again Windies Women won in the super over. 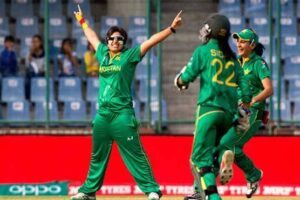 Pakistan Women set a grand total of 150 for 6 in T20 overs while playing first. Pakistan innings was powered by the magnificent fifty from Nida Dar who marked 53 runs on just 43 balls with five fours and two fly kissing sixes. However, the Windies girls started in a jittery fashion, but Deandra Dottin resisted with 46 runs. In the end, Pakistan Women won the match by 12 runs.

Anam Ameen was the Successful bowler from Girls in Green Side, who took three wickets for 34 runs.