Good News for Green Team skipper fans, as Phehlukwayo has forgiven Sarfraz for this racial remarks in the previous ODI match. This happened in the 45th over of South African run chase, when behind the stumps Sarfraz mocked Phehlukwayo for his lucky day. Sarfraz Said ” Hey Black Fella! Where is your mother sitting for you? What have you asked your mother to pray for you?

His words was recorded on the mic, when Commentator asked Ramiz Raja about what Safraz was saying? However, Ramiz ignored it by saying its a long sentence. But,some journalist reported ICC and Cricket South Africa with that incident. The Match Refree noticed it and called on Sarfraz. But, Sarfraz realizing his mistake, already posted a twitter apology. 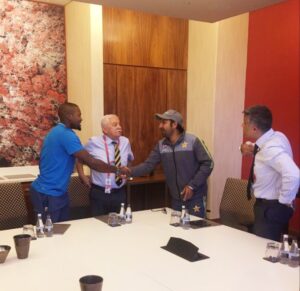 South African captian Fuf Du Plesis said in a press conference that South Africa is a great country. However, if some one comes to South Africa to play cricket he must realize our emotions. South Africa has forgiven Sarfraz for his racial remarks.

Later on, Sarfraz met with Phehlukwayo before the third ODI match which is happening right now and apologized for his words. Phehlukwayo forgave Sarfraz and shook hands with him. The matter is settled now. However, Sarfraz should be careful behind the stumps.