Watch PSL 2022 Live Streaming during Pakistan Super League 2022. PSL 7 is the 7th season of the Pakistan Super League which is scheduled to be held from 27th January to 27th February 2022. A total of 34 T20 matches (including) final will be played in this season of PSL. You can check PSL 2022 Live Streaming & Live Telecast TV Channels List here on this page.

PSL 2022 is going to be the 7th edition of the Pakistan Super League in which six teams will take part. These teams include Karachi Kings, Lahore Qalandars, Quetta Gladiators, Islamabad United, Multan Sultans, and Peshawar Zalmi. All these teams will play thirty-four matches to conclude this year’s champions of PSL. All these PSL matches will be live telecast on official TV Channels and live streaming sites. 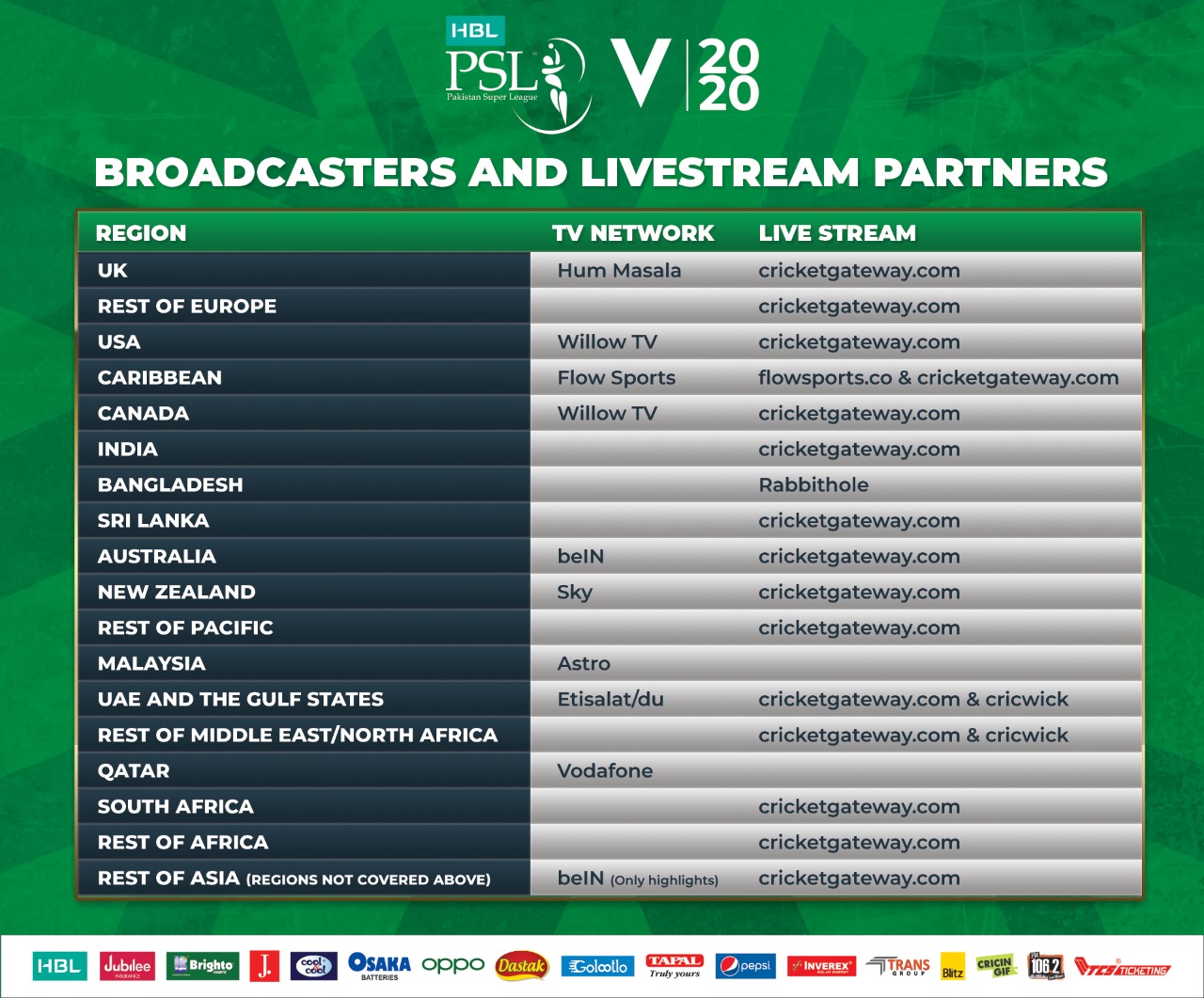 PSL 2022 T20 matches will be broadcast live only on the official TV Channels. Following TV Channels have acquired the official Broadcast rights for PSL 7 to live telecast in different countries.

Apart from it, PSL cricket fans residing in the United Kingdom can also catch the official PSL 2022 Live Stream on Cricketgateway.com.

How to enjoy PSL 7 Broadcast in Europe?

Europe is a great continent consisting of 44 countries and a great number of Pakistanis are also living in European territories for business reasons. A large number of European PSL T20 fans are desperately waiting for the Pakistan Super League season 7 to start. PCB has decided to award the live streaming rights to Cricketgateway in Europe. Hence, all these European cricket fans enjoy PSL 7 matches on Cricketgateway.

Unfortunately, there is no official TV Broadcast for PSL 2022 in Europe. However, PSL T20 fans can catch PSL 2022 live stream on Cricketgateway.

How to catch PSL 2022 Live Telecast in Canada?

Cricket is getting popular in Canada these days. With Canada playing in ICC T20 World Cup 2022 qualifiers, there are many cricket fans who love to watch any cricket game. Apart from it, a good number of Pakistani cricket fans are also residing in Canada for various reasons. Willow TV and Cricketgateway are the two official broadcasters of PSL 2022 matches in Canada. Hence, all those cricket love Canadians who are wondering about where to watch PSL 2022 matches on TV? Well, we have good news.

Willow TV and Cricketgateway will be providing live cricket action during Pakistan Super League Season 7. Hence, if you are living in Canada and want to enjoy the PSL 7 live stream, then Willow Tv and Cricketgateway are the two perfect options for you.

Where to watch PSL 7 matches in the U.S.A?

Cricket has gained popularity in the U.S.A in recent years. With the U.S.A playing in ICC T20 World Cup 2022 Qualifiers, there are many cricket fans living in America who love to watch Cricket on TV. Therefore, PSL 2022 matches will be live telecast on TV in the United States. Hence, if you are a cricket-loving U.S.A citizen, you can catch PSL 7 Live Cricket action on Willow TV and Cricketgateway.

Willow Tv and Cricketgateway are the two official streaming platforms for PSL 2022 in the U.S.A.

West Indies is one of the great Caribbean nations to love and play cricket. With a good number of West Indies players playing for different teams in PSL 7, PSL 2022 is going to be a magnificent event for Caribbean cricket fans. In this regard, Flow TV is the official Broadcaster of Pakistan Super League Season 7 in Caribbean Countries.

Apart from it, Caribbean cricket fans can catch the official PSL 2022 Live stream on FlowSports.co and Cricketgateway.

Finally some exciting news for all those Indian Cricket fans who were eagerly waiting about PSL 2022 Live Broadcast details. Well, here is the good news for you. Though there is no official TV Broadcast for PSL 7 matches in India, if you love PSL, you can catch the PSL 2022 live stream on Cricketgateway.

Cricketgateway is the official Streaming partner in India for the Pakistan Super League season 7. In the past, DSports have the official PSL Broadcast rights in India from 2018 to 2019. However, due to the rising tensions between India and Pakistan, DSports backed off from PSL Live telecast in India during PSL 2019 season.

In this regard, there was a lot of tension going on about Which TV Channel Will Live telecast PSL 2022 in India. Well, we have the answer to it now. While there will be no official TV Broadcast for PSL 2022 in India, all PSL-loving India can enjoy PSL 2022 live stream on cricketgateway.

Where to Catch PSL 7 Live Telecast in Bangladesh?

Bangladesh is one of the top Asian Cricket playing nations. With Bangladesh winning ICC U19 Cricket World Cup 2022, Cricket is the sport in which Bangladesh has created history now. Apart from it, Bangladesh National Cricket Teams are recently now touring Pakistan for Three T20s, three ODIs, and two tests. With PSL 2022 begging from 27th January 2022, Pakistan Super League season 7 is going to be the next big adventure for  Bangladesh Cricket players.

Which TV Chanel will Live Telecast PSL 2022 in Australia?

Australia is the country that comes to mind when one thinks about the great game of Cricket. From ICC World Cup to ICC T20 World Cup and from ICC Champions Trophy to The Ashes, there is no big tournament that Australia has not claimed. With BBL 2020 coming to an end on 27th January, PSL 2022 is going to be the next big event for the Australian Cricket players. In this regard, a lot of cricket fans from Australia will watch PSL 2022 on their TV Screens.

BeIn Sports is the Official Broadcaster of PSL 2022 in Australia. Whereas, Australian Cricket fans can catch the PSL 2022 Live Cricket Streaming on Cricketgatway.com.

How to Watch PSL 7 Live in New Zealand?

Gentlemen are they when one regards New Zealand in terms of Cricket. Though these Cricket Noblemen have claimed no grand title in the History of cricket, the standards they set in form of Sportsmanship are ideal for many. Since the first season of the Pakistan Super League, many good New Zealand players have been Part of HBL PSL 2022. In 2022, it is going to be the same. In this regard, PSL 2022 will catch a good viewership from New Zealand as well.

Where to watch PSL 2022 Live Telecast in U.A.E and the Middle East?

United Arab Emirates provided the home venue from PSL 2016 to PSL 2019. However, with PSL 2022 completely to be hosted in Pakistan, U.A.E cricket fans are going to miss the PSL 2022 Cricket action Live From the Stadium. In addition, Cricket is also a popular sport in Gulf, Middle East, and North African countries. As there resides a great number of Pakistani cricket viewership.

PCB has given the official Broadcast rights to Eitisale and U.A.E for PSL 2022. Apart from it, Cricket fans from U.A.E, Golf, Middle East, and North African countries can catch the official PSL 7 live stream on CricketGateway and Cricwick.

How to watch PSL 2022 Live worldwide?

Cricketgateway has been the official streaming partner with Pakistan Super League Since the first season. Therefore, it is going to provide PSL T20 Live Cricket action live online in 2022 as well.

Apart from it, for the first time in PSL History, PSL Cricket Commentary will be provided in the Urdu Language. In this regard, Urdu Commentators will entertain Urdu-speaking Pakistanis for Five overs in a Match.