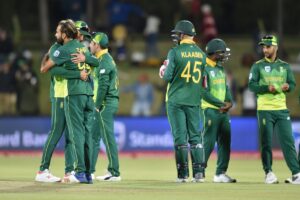 After beating the visitors in the first two ODIs, South Africa is now gearing up to take on Zimbabwe in the 3rd ODI match. In the previous match, Jean-Paul Duminy opted to bat first after winning the toss. However, it resulted in a bad call, as Proteas soon begun to loose wickets.

The 9th Number batsman Dale Steyne was the only batsman to score 60 runs that took South Africa to lower total of 198 for 10 in 47.3 overs.

Similarly, Zimbabwe too started jittery and kept loosing wickets. Only three of their batsmen could score a double figure innings. At the end, Zimbabwe were all out at 78 runs, giving the home team a 120 runs victory. So, its pretty sure South Africa will win this match too.

South Africa will win. The way the made come back in the previous match, shows they are up to win the series. Moreover, this victory will not only give them high moral but will seal the series too.

On the other side, Zimbabwe will look forward to the victory. Though, they had two bad games previously, but now they can give happiness to their fans.