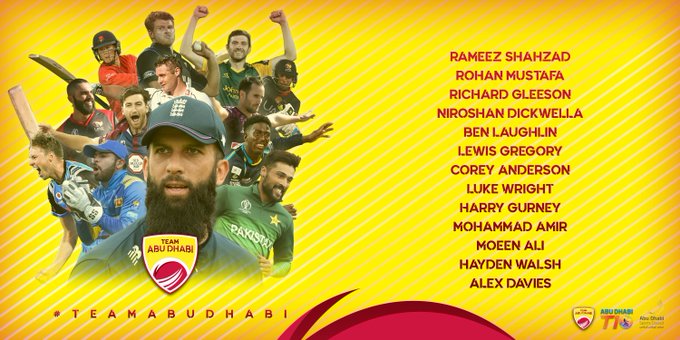 Moeen Ali have played a large number of cricket leagues in the past and Team Abu Dhabi can surely use his T20 experience in T10 League 2019. In addition, Mohammad Amir will be the bowling weapon for Team Abu Dhabi. He can destroy any kind of batting line up, whenever he wants. Niroshan Dickwella will take charge behind the stumps as the wicket keeper and he can also score boundaries when needed. In addition, Team abu Dhabi have also included a number of domestic players from different countries.

Over all, this is a well balanced squad for the Team Abu Dhabi in their first ever season of T10 League. They can upset any strong team and all eyes will be watching over them.

T10 League is all set to be starting from 14th November 2019 in Abu Dhabi. In this regard, Team Abu Dhabi have picked up their players in the draft held yesterday. stay Tuned for more updates on T10 League 2019.