A football agent is a person who hunts football talent, works with it, and nourishes it to reach the next level. As a football fan, you may know of many Football Agents who played a key role in the victory of their respective clubs and teams. Today, we will be talking about Top 10 Best football Agents in the world. 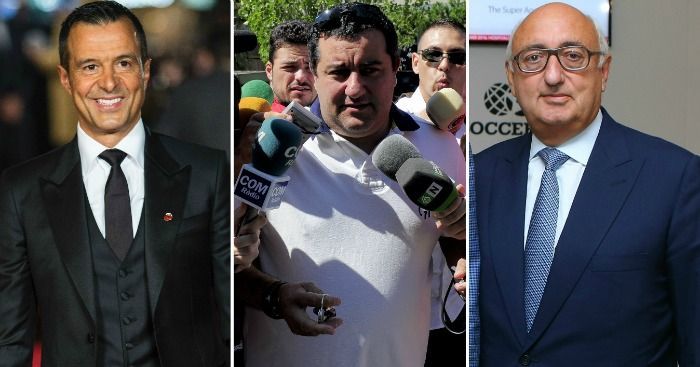 He is acting head of the GestiFute Company which was founded in 1996. Mendes is considered as one of the most influential football agents in the world with clients including Christiano Ronaldo, James Rodríguez, João Félix, David de Gea, José Mourinho, and Diego Costa.

Jorge Mendes has received the Best Agent of the Year Award 10 times at Globel Soccer Awards from 2010 to 2020. He is responsible for finding the best Football talent in Portugal. Not only this, but he has also brokered the seven biggest deals in football history in 2014.

English Football Agent Paul Stretford takes the second spot on our list. He is the founder of Proactive Sports Management which was established in 1987. However, later Paul changed its name to Formation Group in 2004 to represent top English Footballers including Wayne Rooney.

Paul Stretford represented Andrew Cole and Stan Collymore amongst the major players. He was responsible for transferring 17 years old English Football Player Wayne Rooney from Everton to Manchester United for a cost of  £27 million. Stretford received an amount of £1.5 million as part of the deal.

Apart from it, Paul Stretford has been also involved in many other transfers of Elite Footballers. He has earned a great name as an economically successful football agent. Now, he takes the second spot on our list of best Football Agents in the World.

Spanish Football Agent Pere Guardiola also joins our list at the 8th spot. He is the younger brother of Spanish Professional Football manager Pep Guardiola. His brother set up a great reputation as the greatest football manager of all time, but Pere is making his own way in the silence.

Pere Guardiola has worked with the greatest duo of Ronaldo and Ronaldinho during his days with Nike’s Sports Marketing department,  Barcelona, and Spanish national team players. He has recently completed the successful transfer of Uruguayan player Luiz Suarez to the richest football club Barcelona. The deal was said to have a worth of  $130 million.

Apart from managing Luiz Suarez, Pere Guardiola also oversees the management matters of Hector Bellerin, Jon Toral, and Isaac Cuenca. He has made a great fortune as a Football Agent and now he rightfully earns his name on our list of Best Football Agents in the world.

British Sports Agent Jonathan Barnett claims the third spot on our list. He is the chairman and founder of ICM Stellar Sports. Jonathan Barnett was named the number 1 most powerful sports agent in the world by Forbes in 2019. He is the man who brought Lennox Lewis into the boxing world.

Legendary Cricket Player Brian Lara was the first-ever client of Jonathan Barnett. However, he went on to represent some of the great footballers as well. Some of his great football clients include Ruben Loftus-Cheek, Jordan Pickford, Gareth Bale, and Saul Niguez. Recently, he planned the move of Gareth Bale from Real Madrid to Tottenham Hotspur for the cost of  £86 million.

Barnetts Company is now the 4th biggest sports management company in the world and number 1 in football. With all such magnificent achievements as a football agent, Jonathan Barnett rightfully earns his name on our list.

Mino Raiola started playing football at the age of 18, after a brief involvement in the game he decided to become a football agent. Initially, he worked in the Sports Promotions Company. There, he assisted in the transfer of seven high-profile players including  Bryan Roy, Marciano Vink, Wim Jonk, Dennis Bergkamp, and Michel Kreek.

Then he started his own company and his first successful transfer was Pavel Nedvěd from Sparta Prague to Lazio. As of now, Raiola represents more than 20 players from European Leagues. He currently closed the transfer of Paul Pogba to Manchester United. He made a reported €25 million from Pogba’s €105 million transfer deal.

Raiola has made many top-level football clients including Erling Haaland, Moise Kean, Matthis de Ligt, Blaise Matuidi, and Paul Pogba. Therefore, he deserves his name to be on our list of best Football Agents in 2023.

Israeli football agent Pini Zahavi claims the 6th spot on our list. He is best known for his involvement in the ownership changing of Chelsea and Portsmouth. Zahavi is a registered Football Agent from Israel Football Association.

After instability working as a journalist, Pini Zahavi became a football agent. He closes his first transfer deal in 1979 of Israeli defender Avi Cohen from Maccabi Tel Aviv to Liverpool. Zahavi built an extensive network of his contacts to close the football transfer deals.

Pini Zahavi has closed the transfer of Rio Ferdinand from West Ham to Leeds United, Roman Abramovich to Chelsea,  Eyal Berkovic, and Yakubu’s transfer from Maccabi Haifa. Zahavi has made a lot of fortune from his Football Agent business. Therefore, he earns his name on our list of best football Agents in the world.

Tim Hager may not be a decorated Football agent as many of others do on the list, but he has achieved many transfer deals in his Football Agent Career. Therefore, he takes the 7th spot on our list. Tim works on the behalf of WB Sports management company as a football agent and a deal negotiator.

He has brought fresh football talent from France on the main screen that went on to be the best players in the sport. The list of his clients includes Yann M’Vila, Mamadou Sakho, and Antoine Griezmann. Most of these clients play in the French Football League, however, Tim Hanger also keeps contacts with other major clubs as well.

Tim completed the successful transfer of Antoine Griezmann Real Sociedad to Atletico Madrid. This high-profile transfer prints the name of Tim Hager on the list of best Football agents in the world.

English Football Agent Jerome Anderson claims the 8th spot on our list. Apart from football, he also provided his services to the boxers as well. He is the first Agent to introduce foreign players to English Premier League. His Clients included some great footballers including Dennis Bergkamp, Marc Overmars, and Uwe Rosler. During his career as a Football, he has represented more than 200 footballers so far.

Jerome Anderson initially worked as a banker before becoming a world-class Football agent. Charlie Nicholas and David Rocastle were some of his earliest clients from Arsenal. Apart from it, he also presented some other Arsenal players including Tony Adams, Ian Wright, Dennis Bergkamp, David Seaman, Emmanuel Petit, and Thierry Henry.

He also advised Thaksin Shinawatra when he took over Manchester City F.C in 2007. Jerome Anderson is now a retired football agent and works as a banker with other business interests. However, he still makes in our list of best football agents in the world.

Retired Polish Football player Cezary Kucharski became a Football Agent after the end of his career. He started his Sports management company with the name of CK Sports Management. Apart from it, he also acts as a football agent for Eurosportsmanagement Gmbh. Moreover, he also manages Robert Lewandowski.

Being a retired footballer from Poland, helped Cezary hunt the fresh Football talent from his native land. He found some of the best polish football players and presented them to the world. His client’s list includes some of the best footballers including Bayern Munich, Dortmund winger, and vJakub Blaszcykowski.

All of his above achievements as a football agent, print Cezary Kucharski’s name on our list of best football agents in the world.

Finally, we have a former English footballer turned football agent Barry Silkman making up the last spot on our list. He was named the 10th most influential agent in the world by Metro in 2013. After playing football for 16 years, Barry Silkman made a great fortune from the Football Agenting business.

His moderate football career helped him to become one of the most successful Football Agents in the world. He currently manages David Villa, Demba Ba, and Ravel Morrison as a football agent. He has achieved so much in his football Agent career and earned his name to be on our list.