Just In! American Born Mixed Martial Artist Kay Hansen have bagged $50,000 on her UFC Debut. She defeated Jinh Yu Frey in the third round by a submission today at UFC Fight Night Poirier vs Hooker. With this win, she collected a check of 50 Grands as her Performance of the night bonus. The Official […] 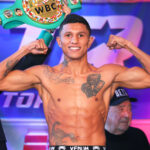 Dustin Poirier is an American Mixed Martial Artist who is currently fighting with The Ultimate Fighting Championship. Poirier made his UFC debut on January 1, 2011 at UFC 125, where he defeated Josh Grispi by unanimous decision. “The Diamond” earned $8,000 from his first fight. According to discrete reports, Dustin Poirier Net Worth in 2020 […]

.Dan Hooker is a UFC Fighter from New Zealand. “The Hangman” made his UFC debut on 28 June 2014. Prior coming to the UFC, Hooker Fought in Supremacy Cage Fighting NZ  and Australian Fighting Championship. He won the King In The Ring Middleweight Kickboxing Championship and WKBF X-Rules Welterweight Championship. Dan Hooker first fight in […]

Alexander Volkov Net Worth 2020 – (Purse Per Fight & PPV Bonus). Alexander Volkov is ranked 7th in the UFC Heavyweight Rankings 2020. Volkov made his UFC debut in 2016 against Timothy Johnson at UFC Fight Night: Mousasi vs. Hall 2. Drago made $22,500 in this fight against Johnson. Following his victory at UFC Fight […]