ICC T20 World Cup 2021 is happening from 17th October in UAE and Oman. West Indies are one of the eight teams to directly qualify for the Super 12 Stage. They are placed among South Africa, Australia, England and two other qualifying from Round 1 stage.

At last the news has come for all those West Indian cricket fans who were desperately watching for West Indies Team Squad for T20 World Cup 2021. Well, Cricket West Indies have got a news for you. The Men in Maroon XI is being captained by Kieron Pollard. 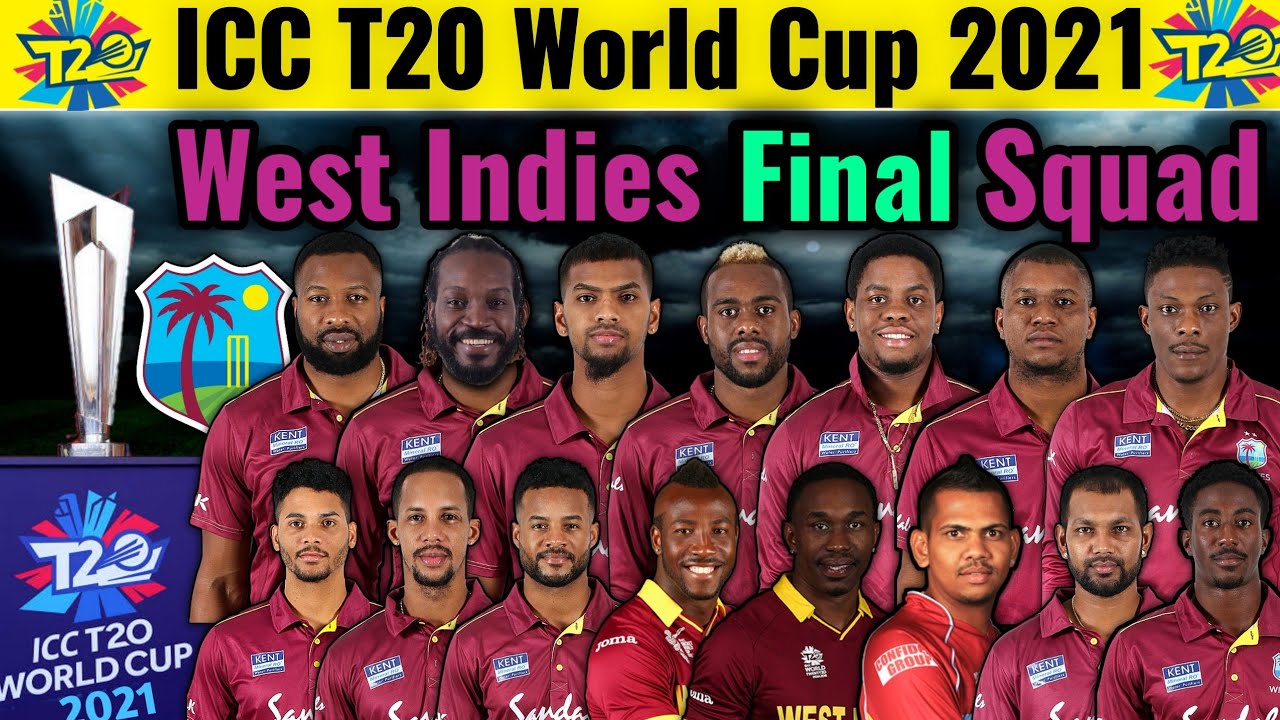 As per the announcement, West Indies team squad for T20 World Cup 2021 consists of young and experienced players to make a strong team. T20 World Cup is finally happening in UAE and Oman from 17th October. Cricket West Indies are informed about the intensity of this tournament.

Therefore, West Indies already have already started preparations for this grand cricket tournament. Recently, they hosted a two match test and four match T20 series for Green Shirts. While test series results came even with 1-1 between these two nations, Pakistan won the T20 series by 1-0 in four competitions.

If weather could not have effected the T20 series, the results may have been good for West Indies. Nevertheless, West Indies are now eyeing on the biggest cricket tournament of their year. In this regard, they have unveiled their team squad consisting of Chris Gayle, Marline Samuels, Nicholas Pooran and DJ Bravo. Here is the West Indies full team squad for T20 World Cup 2021.

West Indies bowling line up includes many star bowlers in T20 world Cup 2021. Sheldon Cottrell and Jason Holder are all set to take charge of West Indies bowling department in T20 WC 2021. They have the extra support from Oshane Thomas and Fidel Edwards. All these bowler will be giving up their best to win the third T20 Title for West Indies.

West Indies are the most successful team in numbers of T20 World Cup title won. They won their first title in 2012 under the captaincy of Darren Sammy and became the World Champions for the 2nd time in 2016. They are the only team to win T20 World Cup title for two times. Moreover, they are also the defending champions in T20 WC 2021.

However, it seems like it will be difficult for West Indies to defend their title in this season. Given their performances in recent series and on ICC rankings, they are far behind the top T20 teams in the T20 World Cup. Lets have a look at the glorious past of West Indies in T20 World Cups.

Despite being the T20 Champions for two times, West Indies have not been up to the mark from a couple of the months. However, T20 World cup 2021 an be the opportunity for West Indies to find their last glory. If they can defeat the top opponents and manage to win the final, they will become the World T20 Champions for the 3rd time in cricket history.

West Indies have directly qualified for the Super 12 stage as per ICC rules. They are placed in Group 1 of Super 12 Stage among Australia, England, South Africa and two other qualifying teams.