Joseph Benavidez is ranked 2nd in the UFC Flyweight Rankings 2020. He made his Mixed Martial Arts debut in 2006. Since then, he has fought in Universal Fight Promotions, Border Warz, Professional Fighting Championship and WEC. Benavidez’s first fight at UFC 128 was against Ian Loveland. As per reports, he earned $39,000 from this fight. […] 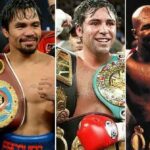 10 Highest PPV Boxing Fights – Buys and Revenue Of All Time. Boxing generates revenue, when it comes to Pay Per View Buys. All the action loving boxing fans are always ready to pay for a good boxing match. However, sometimes when a top bout is on the card, PPV buys record all time high […]

Highest Paid Boxers in 2021: Richest Boxers in the World 2021, Most Expensive Boxing Contract Details in History. Boxing is a sport where the dreams of the Boxers come true when they make a lot of money in their fights. Some of these boxers get paid on standard levels, while other score huge sums that […]

Highest Paid UFC Fighters 2021 or Highest Paid MMA Fighters 2021. The Ultimate Fighting Championship or UFC is the train for UFC Fighters to earn a lot of money. Some of these Fighters are getting paid on small scale, while others are hired at the highest cost. So, a question remains in the minds of […]