Get Pakistan Super League PSL 2020 Schedule, Match Fixtures. The fourth Season of  Pakistan Super League is scheduled to be held from 20th February to 22nd March 2020. The mega cricket tournament of the year will be broadcast live all over the globe from Pakistan. You can check the PSL 2020 Schedule, Match Fixtures and Time table here on this page. 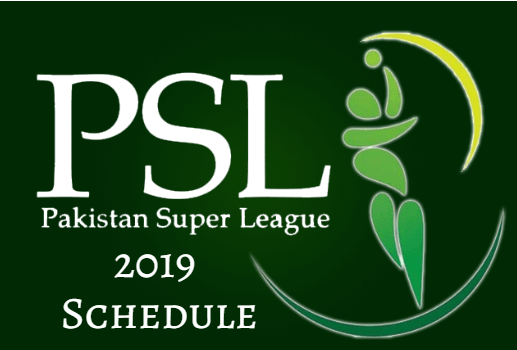 Finally some good news for the Pakistani cricket fans who were eagerly waiting for the PSL 2020 season to arrive. Pakistan Cricket Board ( PCB) has announced the schedule for the third season of Pakistan Super League. This year PSL will be held in UAE and Pakistan. Different venues have been selected for this purpose. Moreover, Six team are participating in this season of PSL. The PSL 2020 tournament format is Round Robin and Play offs which means all the six teams will battle for the top four slots in the group stage.

In the previous season there were six team which participated in the tournament, however Multan Sultan were terminated before the PSL 2020 auction. As, Schon failed to pay a debt to the PCB. However, Ali Tareen the son of the renown Pakistani Politician Jahangir Tareen bought the Sixth team for PSL 2020. The name of the sixth team has not yet been introduced by the owner but Ali promised that it will be named after the Multan City.

Islamabad United who win the PSL 2018 season are the defending champions in this season of Pakistan Super League. The United have won the PSL trophy for two times, however Peshawar Zalmi won the second season of PSL when they defeated Quetta Gladiators. Speaking of Quetta Gladiators who are the most unlucky team in the PSL as they reached the final for two seasons but could not won it.

The first season of PSL was held in U.A.E as security conditions in Pakistan were not good those days. However, as Pakistan strove for safe and secure conditions, this year 13 matches will be held in Pakistan. The complete list of venues will be as follow:

Pakistan cricket fans are excited for this season of PSL as Lahore and Karachi will be hosting some of the PSL matches this year. Cricket have been the most loved sport in Pakistan, but due to the unfavorable conditions Pakistan could not host cricket matches. This season of Pakistan Super League is not only a hope for cricket survival in Pakistan but also for other sports too.

The first phase of PSL 2020 is the round robin stage in which the six teams will battle in 10 matches for each team. The top four teams will qualify for the play off stage. Each win will carry two points, however if the match ends in a no result both sides will get one point.